Being agile without knowing it – lessons from a yacht race

As some of you know, I spent my twenties as a professional yachtsman and was lucky enough to race a couple of times around the world.  The highlight of that period was skippering Toshiba to second place in the 1996/7 BT Global Challenge race, something I’m immensely proud of to this day.

That was 20 years ago and the idea of Agile didn’t formally exist. However, when I’ve been sharing stories about how we did things on Toshiba, a number of people including my good friend and Agile guru Mark Williams have often pointed out that we in fact adopted quite a few Agile principles and ideas, although more through luck than judgement.

So what did Mark and others notice?

Vision and direction, but no fixed plan

Clearly we had a very clear goal of racing around the world, ideally faster than everyone else.

But we were also smart enough to know that an exact route and plan was something we just couldn’t work out step by step.  We had a few mantras to reinforce this flexible mindset. For example we raced “towards” the next stopover port, never “to” it, recognising that ‘events’  (weather, damage etc) could force us to change what we were doing at any time.

Similarly, we told each other that there was “no such thing as an ETA” – we were working as fast as possible to get there, but an estimated time of arrival wasn’t a helpful thing to focus on.

We broke tasks down to simple elements all the time,  and our four-hour watch (shift) system naturally supported this.  We often told each other to take things “One watch at a time”.  Each Watch had a simple brief and debrief, focused on the tasks in hand and how we could improve things – very much like a daily stand up.

Each leg  (the race was split into various legs between stopover ports) was effectively our sprint of effort – we always had a really thorough debrief covering in depth what we did during the previous leg and how we could do it better.  We also focused on how we worked together, not just what we did.  In hindsight, that was our team’s sprint retrospective.

Our ‘customer’ was our waypoint closing velocity (WCV) – ie how fast we were going towards our target stopover port.  Pretty much everything was measured against WCV.

There were a few memorable occasions when a direction to steer or boat configuration  should not have led (logically) to a better WCV, but it did, so we continued doing it, even though we had little idea why it was faster!  There was a great focus on testing, measurement and learning from whatever empirically worked.

Another aspect was the the four-hourly position reports sent to us by satellite showing where we were relative to the the other boats.  This in effect was our market testing.  It was no good thinking we were going fast if the others were going faster.  Each set of figures was written up on a white board when they came in, and everyone pored over them as they prepared to go on deck for their watch. 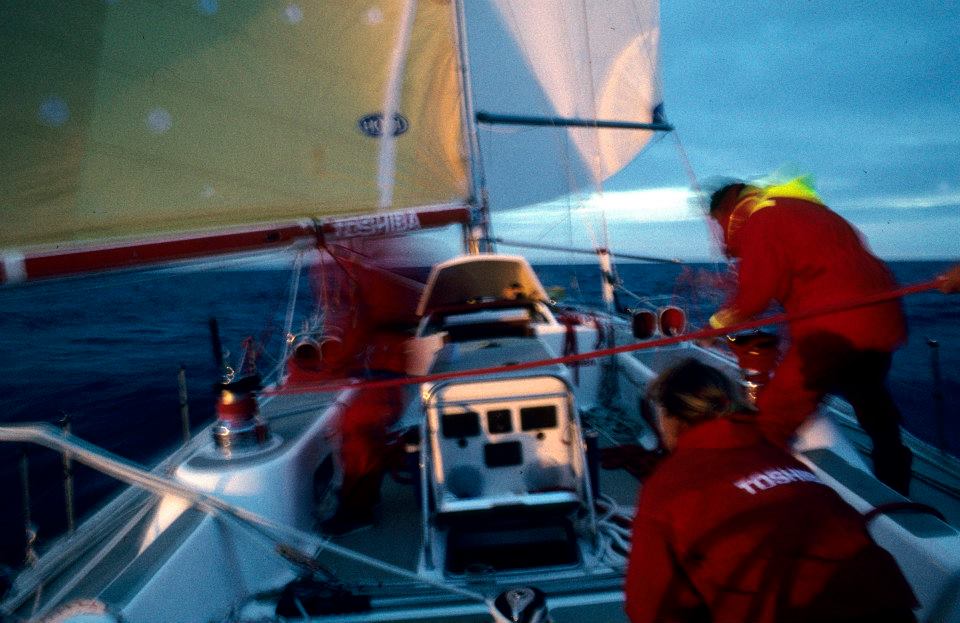 In any given wind and sea conditions, one-design yachts like ours usually sail at very similar speeds.  Although we did track and improve boat speed, the biggest gains were in our maneuvers, doing them quicker each time and most importantly, reducing the error rates – a mistake that breaks a bit of gear or slows the boat down for any length of time has a big impact on your result.

This focus on continuous improvement meant that not a single task was done the same way at the end of the race as when we started.  Even each watch often did things in slightly different ways to the other, but it was always a measurably better way for them.

We invested a huge amount of effort into ensuring we focused on the motivation and wellbeing of each other. Our simple, but very much lived values of Safe, Happy, and Fast captured this clearly.

We checked in with each other regularly and as skipper I put great store in our team stopover ‘retrospectives’  followed up with individual one to ones (usually long walks along the quay).  We knew that how people felt about things was as important to their performance as what skills and knowledge they had gained

“Not bad for the first lap”

One feature of many Agile applications is that although there is a long-term vision and direction there is often no end point.  That is why Agile approaches are so good when applied to continuous challenges such as behaviour, culture or performance change.

On Toshiba, just before we crossed the finish line in second place overall, one of the crew Geoff said, “second’s not bad for the first lap!”.  I realised then that although our project had come to an end, we had built something that was sustainable, and given half a chance, most of us would have gladly gone round again, getting even better at what we did.

I’m sure there were many other Agile aspects of what we did but the last lesson for me reflecting on what we achieved exactly 20 years ago is this:

Whatever you want to call it, Agile is all about focusing on what works.  Many of the ideas have been around for a very long time, but now more than ever before, they are a particularly useful.

Do you want to explore culture and behaviour change using Agile ideas? Simon and his team helps organisations design, mentor and embed Agile ways of working, including changing organisational cultures. Call Simon on 020 3488 0464 or email simon@simonwalker.org