How our communications preferences differ by generation

Not surprisingly, workplace communications preferences vary considerably across generations.  This is largely a result of what communication method each generation has grown up with and got used to, but there are some interesting surprises. Understanding the differences can offer insights into working better in cross-generational teams, as well as how best to work and communicate with customers. 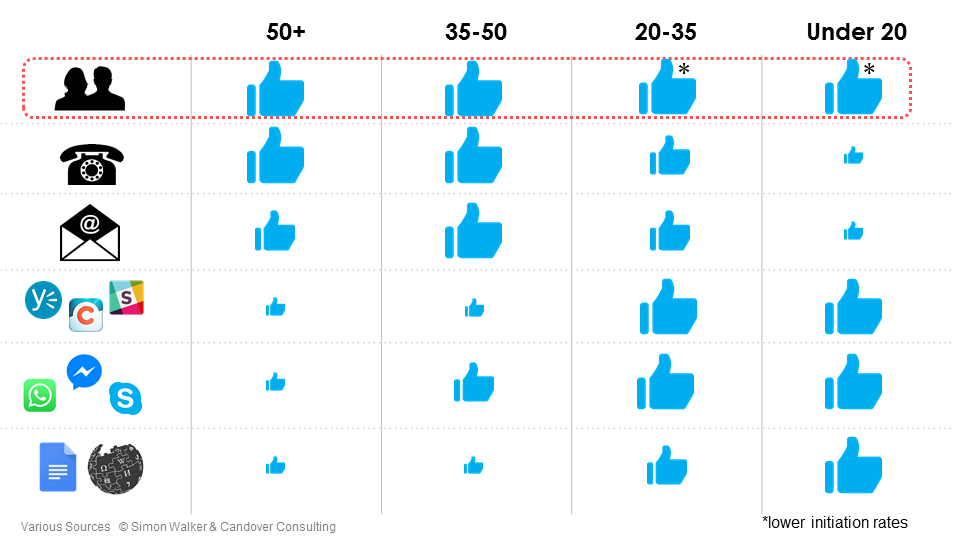 Of course there is wide variation and adoption rates within generational groupings, and we mustn’t fall foul of believing stark stereotypes. However  there is enough of a pattern to get some useful understanding.

Smart leaders and organisations understand these patterns and invest the time with their teams to discuss them.

Let’s dive into the patterns.

Before we look at technology-based methods, it’s really important to mention that people really like to communicate and collaborate face to face regardless of generation. People connect and understand each other far better when they can look each other in the eye.

There is some evidence that the younger you are, the lower the initiation rates of face to face discussion – often Gen Y and Z are content continuing to use text-based methods via their mobile or other device, rather than going over to talk to someone.  But once a face to face conversation gets started, most report that they really value the interaction.

It’s worth noting that now ubiquitous video chat or conferencing systems such as Skype, facetime and google hangouts offer many of the benefits of face to face (studies show that even poor quality pictures improve understanding and engagement in a conversation) and allow conversations across wide geographies, but generally these systems are less favoured the older you are.

Speaking on the phone

Surprisingly, even though Gen Z (current teenagers and younger) own phones from an ever earlier age, they don’t actually use them for traditional spoken conversations. In a recent Ofcom report, just 4% of 12-15 year olds’ communication time was talking on the phone, whereas they spent a whopping 94% engaged in text-based messaging.   To a lesser extent this is also true for Gen Y (20- somethings) – often preferring a variety of text based methods.

Some organisations, where phone based communication with customers and colleagues is prevalent, actually hold `using the phone` sessions during graduate inductions!

Gen X, most of whom have a love-hate relationship with email, use it the most, but often complain that it rules their lives.  Their frustrations are often driven by being in that habit of using email for everything, including things it isn’t very good at – for example sharing and collaborating on documents (a version-control nightmare familiar to many) or co-ordinating a time sensitive event only to find that one person in the conversation has only just seen the email chain and the plan falls apart.   In both these examples, using a cloud-based collaborative document and a messaging app with real time status display respectively, would avoid the down sides.  Unfortunately the email habit is hard to shake if it’s all you are familiar with.

Gen Y and Gen Z however are far less wedded to email.  They have grown up with a wider range of tools better-suited to particular tasks.  Email, while handy a universal medium that will allow communication with anyone, is often used as a last resort. When they say they’ll email you, they usually mean they will direct/private message within a social platform.  As a concrete illustration it is notable that most universities don’t bother to issue emails accounts anymore – students simply don’t use them!

In-house social networks such as Yammer, Chatter or Slack are gaining traction in many organisations and have a lot to offer if adopted widely. They are used by predominantly Gen Y and Gen Z who value the transparency, lack of clutter, duplication and ability to rapidly collaborate across functions and project teams.  Most Gen Y and Z`s have used social networks for all their social communication, so it’s a natural extension to use them at work. Older generations, while also increasingly using facebook etc outside of work, seem to be far less likely to adopt them widely at work.  This inconsistent use by older colleagues diminishes the opportunity of these systems as the only active users are often younger. Some organisations have reported that in this scenario, younger colleagues are reverting back to using informal groups on facebook with all the security and compliance worries this entails.

If you are going to use these type of systems, leaders need to support all employees with encouragement, training and importantly positive role modelling.  Where senior leaders engage in in-house social networks, organisation wide adoption is considerably higher.

Gen Z have grown up with cloud-based services such as Google Docs, Microsoft Office Online and Wikipedia, so they naturally feel more comfortable contributing to a document where everyone can see the current version live on screen. These systems also have the benefit of being device-independent (so you can read and edit on any device, anywhere, any time) while promoting wider co-operation, and reducing version control headaches.

Instant messaging systems like Skype, Telegram or WhatsApp are brilliant at co-ordinating real-time conversations with ad-hoc groups.  Being able to see (through on/off line status) whether people are in the conversation is a real advantage here.  Again the general trend is that these are more widely adopted and preferred the younger you are. The resultant freedom to co-ordinate on the fly has led to significant changes in how people approach simple projects.

All the methods discussed here have their place, but the wide variety of preference and adoption rates across different generational groups should prompt pause for thought and, importantly, discussion within teams and organisations.

There is no single ‘right’ mix, but smart teams discuss and agree what suits them best.  Why don’t you discuss the chart above at your next team meeting?

If you’d like to inspire and enable your leaders to better engage their teams by embracing the future of work, then call Simon on 020 3488 0464 or email simon@simonwalker.org