I’m sure like me you’ve seen many corporate values statements in offices – on posters, mugs and mouse-mats.  I’ve even seen them printed on love-heart style sweets!

They are often very similar – you know the ones “ integrity, communication, respect and excellence,” just like those in the image above. 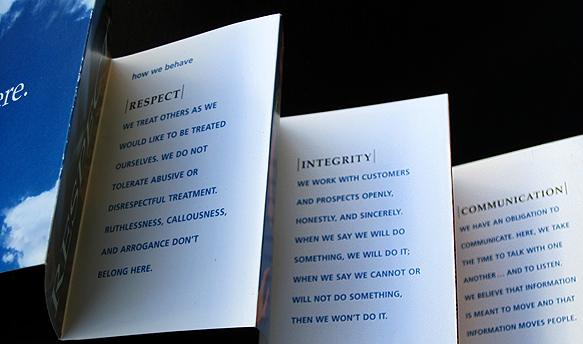 The eagle-eyed with notice those were in fact the stated values of Enron – they even had them carved in the marble of their over-the-top lobby at corporate HQ.  Despite these stated values, the leaders of Enron were the perpetrators of one of the world’s largest corporate frauds, losing their shareholders billions, their employees their jobs and the directors their liberty.

My key point here is that when it comes to corporate values, what counts is not what you say, it’s how you act.

Or another helpful way of looking at it is that the real corporate values are what an organstion actually values through their actions.

I believe values are helpful guides within organisation but only if the organisation does actually value them though its actions.

Here’s a simple test for you. Ask your HR team to provide you with a list of the last 10 people to get promoted, get a raise or a bonus, were managed out of the business or were fired. Then ask them to explain, in a few words, why those things happened to each of those individuals.

I often do this exercise with clients and a couple of interesting patterns emerge.

Firstly, about half of the actions are actually to do with money or being profitable for example,  someone got a bonus or pay rise because they closed lots of big deals or saved loads of money. Clearly in this case the organisation is valuing commercial behaviours and rewarding it.

Despite this pattern, most organisations don’t have have be commercial as a stated value, (I’ve written about an exception  – Bromford – but they totally get what values are for), even though that’s what organisation most often reward (value through their actions).

Secondly, there is often very low correlation with corporations demonstrating that they actually value or reward being innovative, showing more flexibility or experimenting more, even though this increasingly appears on their stated values charts.

As leaders, try the exercise above with your organisation – you may be surprised.  Then, based on what values you believe are really important to you organisation, layout in detail how  you will show that you value these these things, through pay and reward, promotion, recognition and recruitment. Only by doing this will having a considered set of values shape the business in the positive way that you desire.